A tribute to Charles G Wootton: an American at the OECD, and beyond

I was clearing out my desk and rummaging through old files when I came across this: a letter I had kept from the widow of a former OECD Deputy Secretary-General, who had passed away in 2014. The letter had arrived in the secretary-general’s cabinet, and was then kicked down to me.

The OECD Observer, the magazine I ran, didn’t publish it at the time, not just because of a range of typical editorial policy excuses, like space, time, pertinence, fit, etc. We rarely if ever published obituaries of former staff–that role more properly belonged to the internal staff journal called Atmosphere, which like the OECD Observer, has not appeared in a few years now.

In fact, we rarely produced obituaries on anyone at all: the first one I know of was in a 1963 issue after the assassination of John F Kennedy, who played an instrumental role in helping to kick-start the OECD; we also published a tribute to Nelson Mandela in 2013 (you can see it on page 40 of this edition on Issuu).

However, to be honest, I had considered publishing the letter, and have thought about it a few times since. When I read it now, I realise that perhaps I should have, not because Mr Wootton had a rather senior role in the organisation, but other reasons: the letter was short and simple, was about a real person, portraying a human side of the organisation, and was written with love by his widow.

The OECD Observer has been discontinued since 2020, making it too late for that journal. So, as its last and longest-serving editor, I am taking the liberty of publishing it now, as a tribute also to Mrs Wooton (whom I believe is in her late 90s now), and for the archive. Hopefully this note will seep into the web, be picked up via social media and win a wider readership over time. Here it is, unedited: 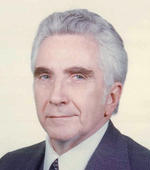 "Charles G. Wootton passed away on Saturday January 11, 2014 at the age of 89. He was the Senior Deputy Secretary-General of the OECD from January 1974 until June 1980. Also he was awarded the assimilated rank of Chief of Diplomatic Mission by the Government of France.

Prior to serving in this capacity, he had been the minister/counselor for Economic and Commerical Affairs at the American Embassy in Bonn, Germany for five years. In sum, he served in the American Diplomatic Service for thirty-one years in various Euorpean countries, the Philippines and in Canada.

Upon departing from the OECD in 1980, he joined the Gulf Oil Company as Coordinator for International Affairs and later, when Gulf was acquired by Chevron Oil Co. in San Francisco, he continued in that position until his retirement in 1993. Subsequently, he lived in San Diego, CA until his passing in 2014. In his retirement, he enjoyed doing volunteer work in many different capacities, particularly in the field of education, where he was awarded many honors.

His wife, Elizabeth G. Wootton, and all six of his children, all nine of his grandchildren and five great-grandchildren reside in San Diego, CA and other parts of Southern California.

Mr. Wootton is interred at Fort Rosecrans in San Diego, where he was awarded full military honors in February 2014, followed by a memorial service in March at the Point Loma Presbyterian Church in the city where he resided in his retirement. In all, he lived a richly fulfilled life.